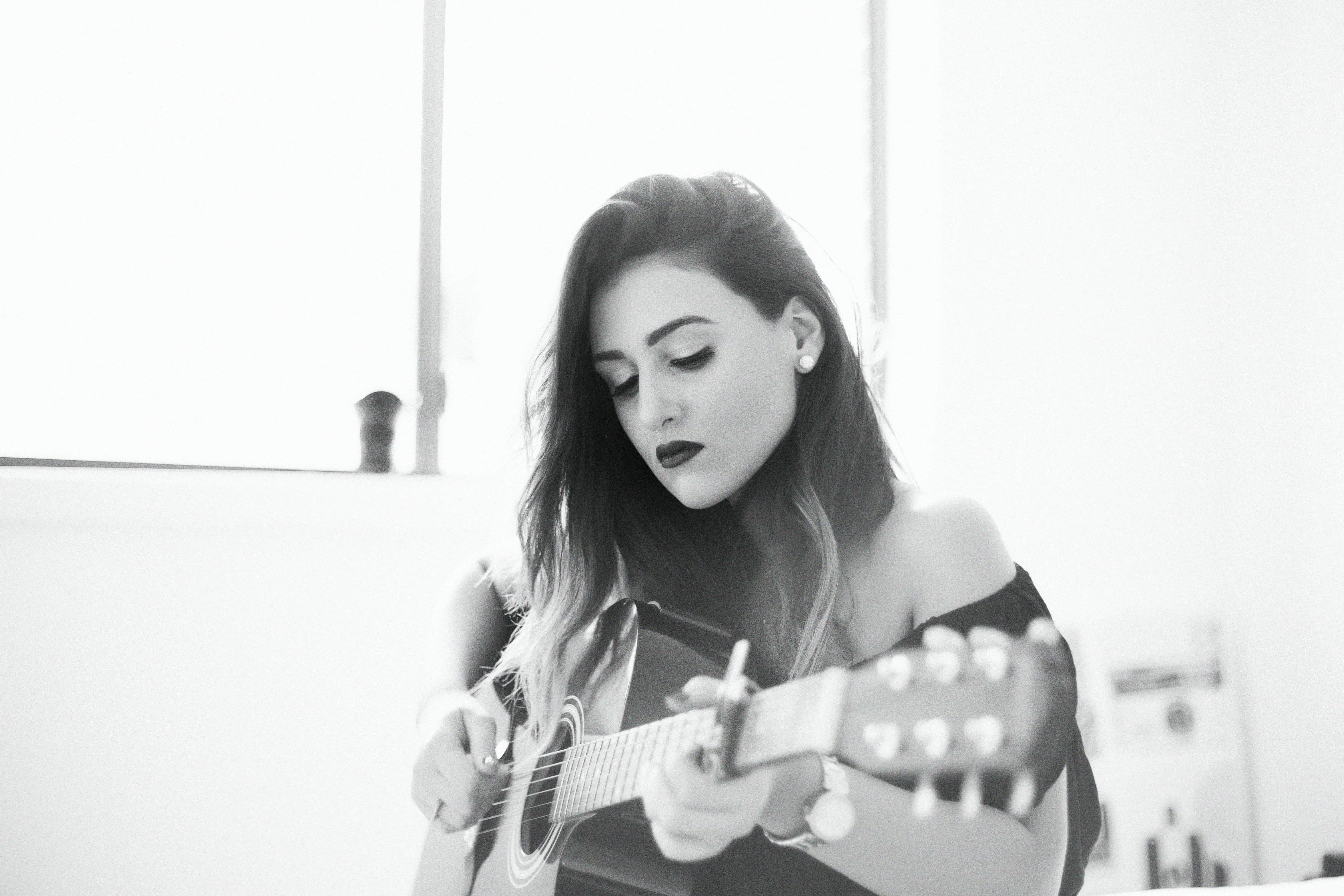 When we are talking about music, one of the most important factors that make up a good guitar is the overall sound.  This can become a very complex subject to talk about or write about, but it is important to discuss.  High sound quality has everything to do with the guitar’s materials and composition of the body.

Solid basswood has been a goto for many guitar producers because of its costs.  It has a fat mid-range sound that mixes well with many types of music.  Walnut is closer to the mahogany family and has a very warm and full sound.

Taking in a few of these different wood variations, one can already consider how the makeup of the guitar makes all the difference in the overall sound.

What Should You Look When Purchasing A Fingerstyle Guitar?

Purchasing a fingerstyle guitar can be a little daunting, even for those who are at the top of the game.  There are so many options out there, oftentimes the market get’s a little diluted.  When facing this crisis, many so go with the most popular brand. This is something I’ve done in my earlier years in purchasing guitars, but it is not the most effective way to go.

In my humble opinion, there are three main things to look for when purchasing a fingerstyle guitar.  They are:

One of the most important things to look for in picking a fingerstyle guitar is the volume output.  I’m not talking about the electronics of it.  The actual acoustic guitar needs to have a higher volume output due to the level of playing.

With guitars that are focused on strumming, they tend to have more of a brighter and tighter sound.  This is because of the amount of volume that is being created from the strumming patterns.  With fingerstyle guitars, the volume is output is much smaller due to the less impact style of rhythm.

A guitar that has a higher resonance will sound better because the notes carry a longer distance between each other.  This helps create an acoustical dynamic that is both rich and powerful.

Along with having a good volume output and resonance level, a fingerstyle guitar needs to have really good bracing.  The bracing plays a vital role in the transfer of vibration that the strings and neck are producing.  A low-quality bracing scale results in poor sounding voicing.  A high-quality fingerstyle guitar has really good bracing so that each note has a rich, warm tone to it.

Really nice guitar for a limited budget.  This guitar is made of out mahogany wood which gives it a tremendous amount of sustain.  This is perfect for fingerstyle because each note needs to register longer due to the lack of volume output acoustically speaking.

The solid mahogany framing brings more warmth and depth than other types of guitars made from different materials, especially maple which has a brighter sound.

Another good feature is the fretboard or nut width is larger.  This makes the voicing of more difficult chords easier and discourages muted notes for players.  Basically, it makes it easier to play fingerstyle because of the easier ability to voice various chord shapings.

Perhaps the greatest feature of all is the price.  Compared to other guitars in its wheelhouse of tone and sustain, it’s pretty cheap.  You get everything you pay for and much more, which makes me feel a lot better pulling the trigger.

One of the negatives that I have found with this guitar is that it seems to have pretty high action.  On some fingerstyle guitars, the action is raised for voicing.  That may be some people’s preference, but it’s not exactly mine.  I like mine a little lower, but it’s all about personal preference.

Another negative is that some reviews have complained that it came out of the box buzzing.  Now, this is generally the expectation, but still something to consider when thinking of purchasing.  Overall, though, I really like the guitar.

Another fantastic option for a limited budget.  The Taylor Big Baby Taylor gets its name from its third dimension in the back of the body of the guitar.  The triad shape lends itself to a fuller sound, which is the natural tone any fingerstyle player is wanting to have.

The body of the guitar is made out of Koa, which lends itself to a warmer sound, although not as warm as mahogany.  With guitars made out of Koa, the sound has a brighter richness to it.  If you are not quite ready to go all the way in a warmer tone and want something a litter brighter, this guitar may work well for you.

Another great feature is the weight of the guitar, it’s super light.  This is not a full-size guitar, which helps make the guitar easier to play.   This helps if you are planning on taking this guitar to any gigs.  For being lightweight, the tone isn’t sacrificed too much.

One of the better fingerstyle guitars at its price.  Although on the cheaper side, the wood body and kneck framing help the guitar sound full and with a lot of depth.  The body of the guitar made of mahogany, while the kneck is rosewood.  This helps create a nice warmth to the guitar sound.

Another nice feature is the neck size.  Compared to other fingerstyle guitars, it’s only the smaller size, which makes the playability much easier.   However, I would not recommend this guitar to anyone who has big hands.

Something I don’t really like about the guitar is that is has been known to have a high action.  I’m not a fan of high action, but that’s just me - personal preference.

This guitar is not acoustic-electric.  On the bright side, you get the guitar on the cheaper side, but you will have to pay more to get an electronic pickup put in it.

The two main features of this guitar are the wood quality and the dreadnought style of playing.

The mahogany wood allows the guitar to have a very warm sound and rich depth.  For those who are looking on a brighter sounding guitar, think maple wood.  This is the opposite.  I personally prefer a warmer sound, so I really liked this guitar.

The dreadnought style is perfect for fingerpicking as well.  The neck is made for the complexities of larger chord voicing, which I like, but if you are a beginner you may not partially care for it.

Overall, the cost is pretty cheap, considering the sound of the guitar.  People who are looking for a gateway guitar into the fingerpicking world should consider it.

The only thing I think this guitar is missing is a third dimension to the body.  This would give the guitar a louder sound and would create a better volume output.  However, at the price range, it’s still pretty nice, to be honest.

Overall, I really like the sound of Martin guitars because I lean more on the warmer side.  This guitar doesn’t disappoint in that regard.  It is made of high-pressure laminate koa wood, which lends itself to a warmer sound, although not as warm as mahogany.

With any high-pressure laminate, it’s not 100% wood,  but it still works very well.  Ed Sheeren plays on Martin pressure guitars, so it works for him.  Another thing I like about it is its overall durability.  It doesn’t have to only be played inside to sound well.  It is very weather resistance, which allows guitar players more flexibility.

It’s probably one of the better live playing fingerstyle guitars out there, in my opinion.  For those who do not like a larger size guitar, however, I wouldn’t recommend it.

My recommendation on the best fingerstyle guitar is the  Epiphone DR-500MCE!  Although you probably couldn’t go wrong with any of the guitars, I personally prefer the Epiphone.  It’s just the safest beat due to the framing and nut width.

Hopefully, my recommendations have helped you out today.  Believe me, we have all been there trying to pick out a new guitar.  Although I would go with the Epiphone, it is simply just my personal opinion after doing my homework. 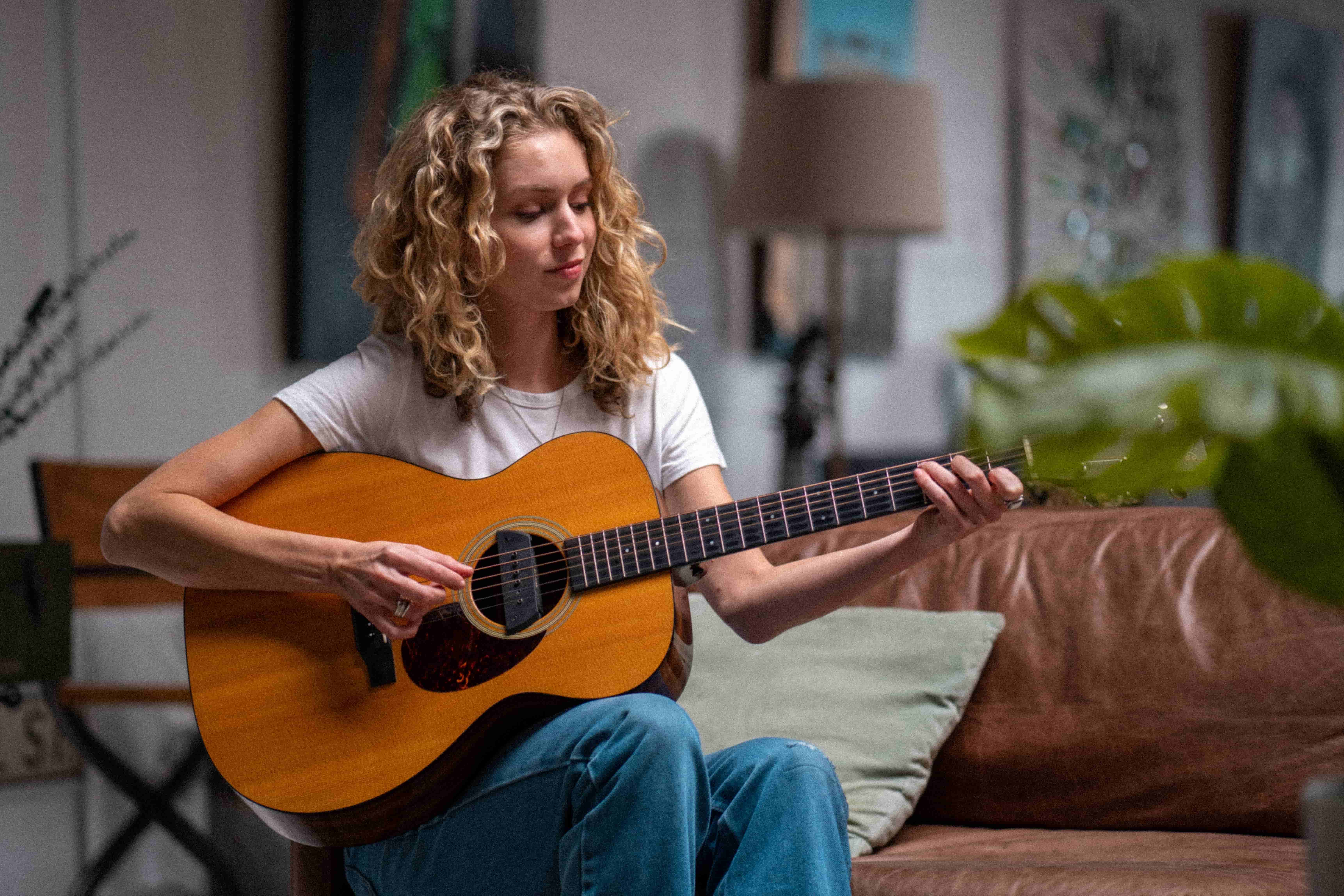 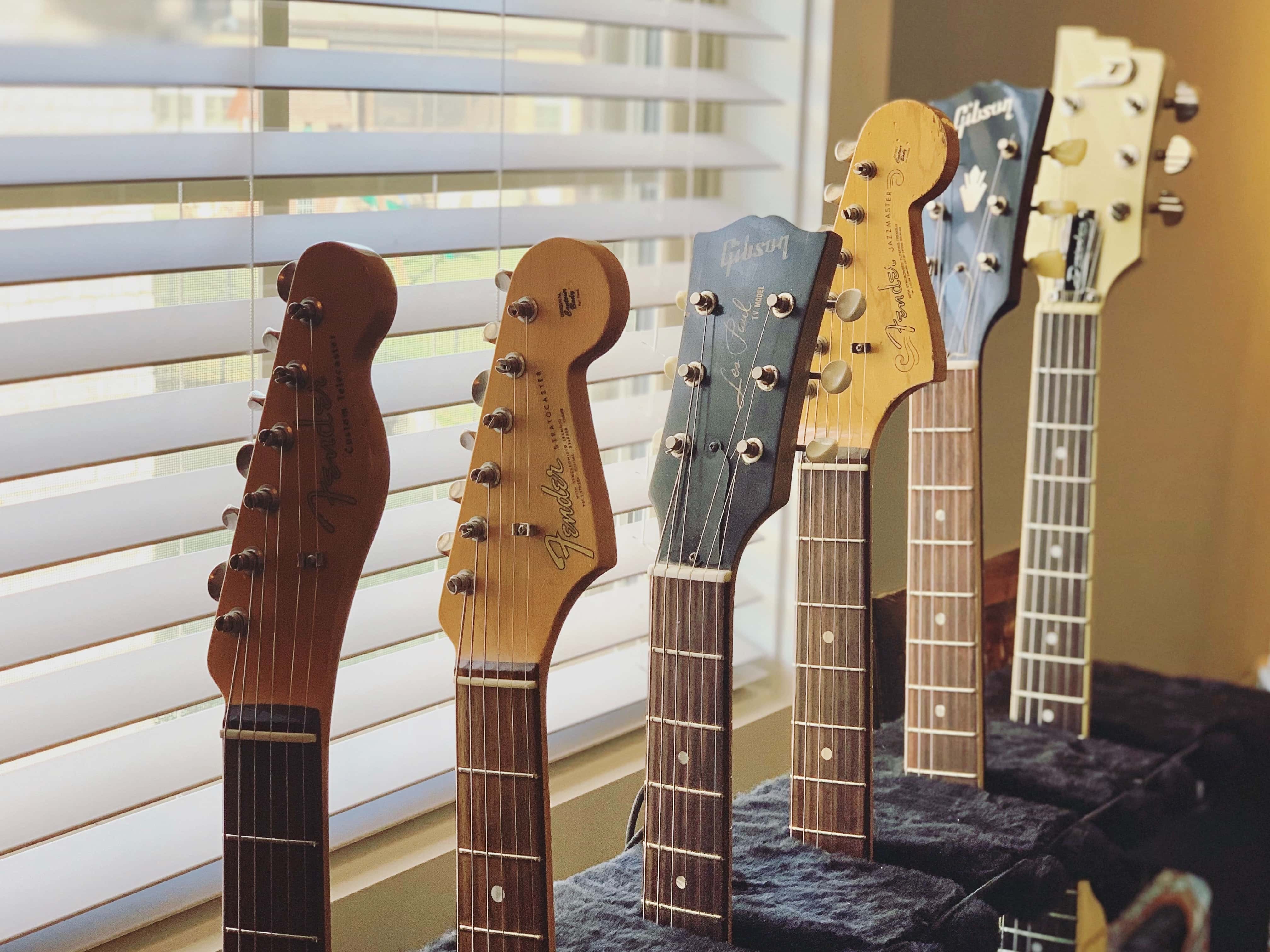 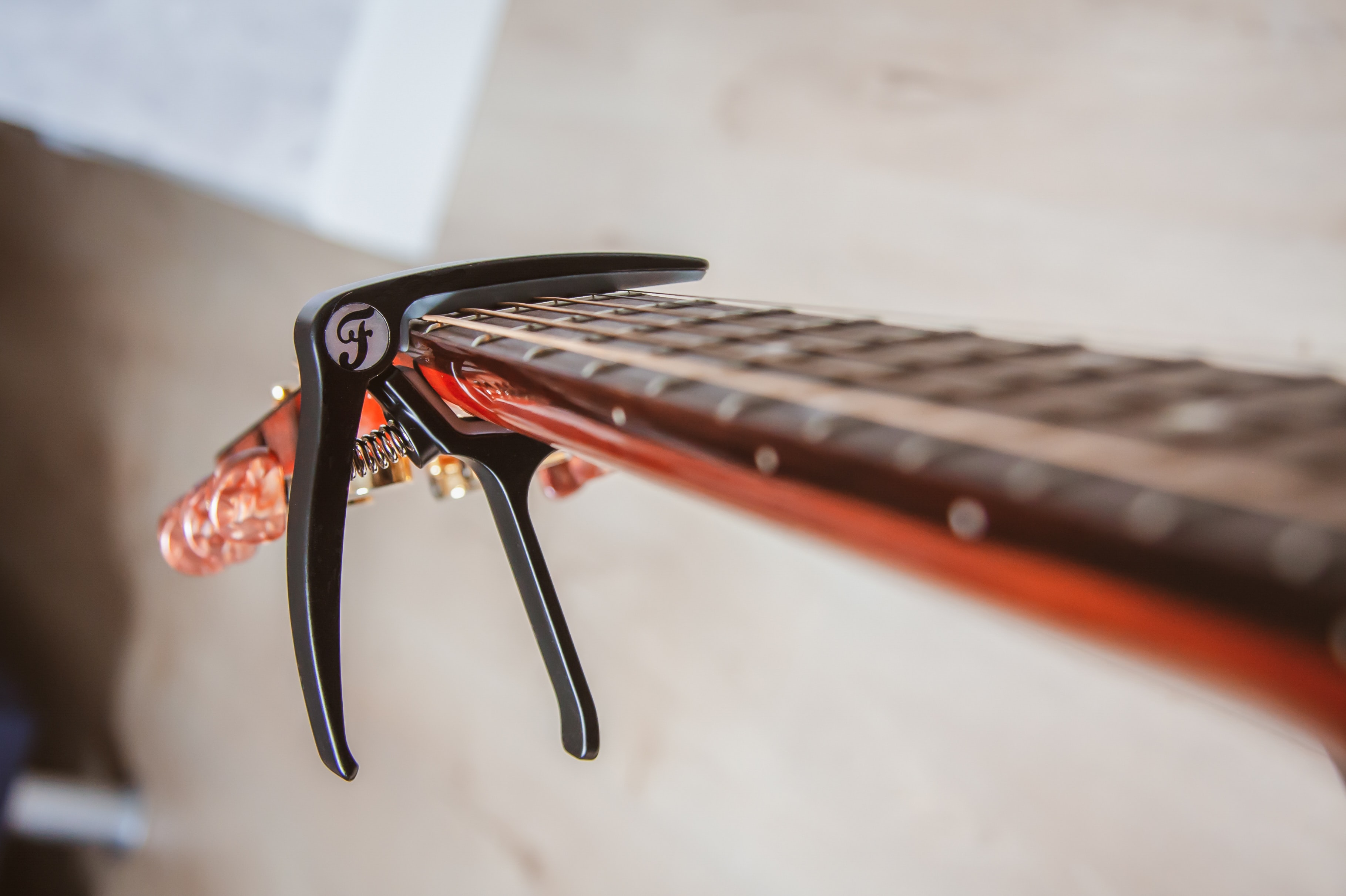 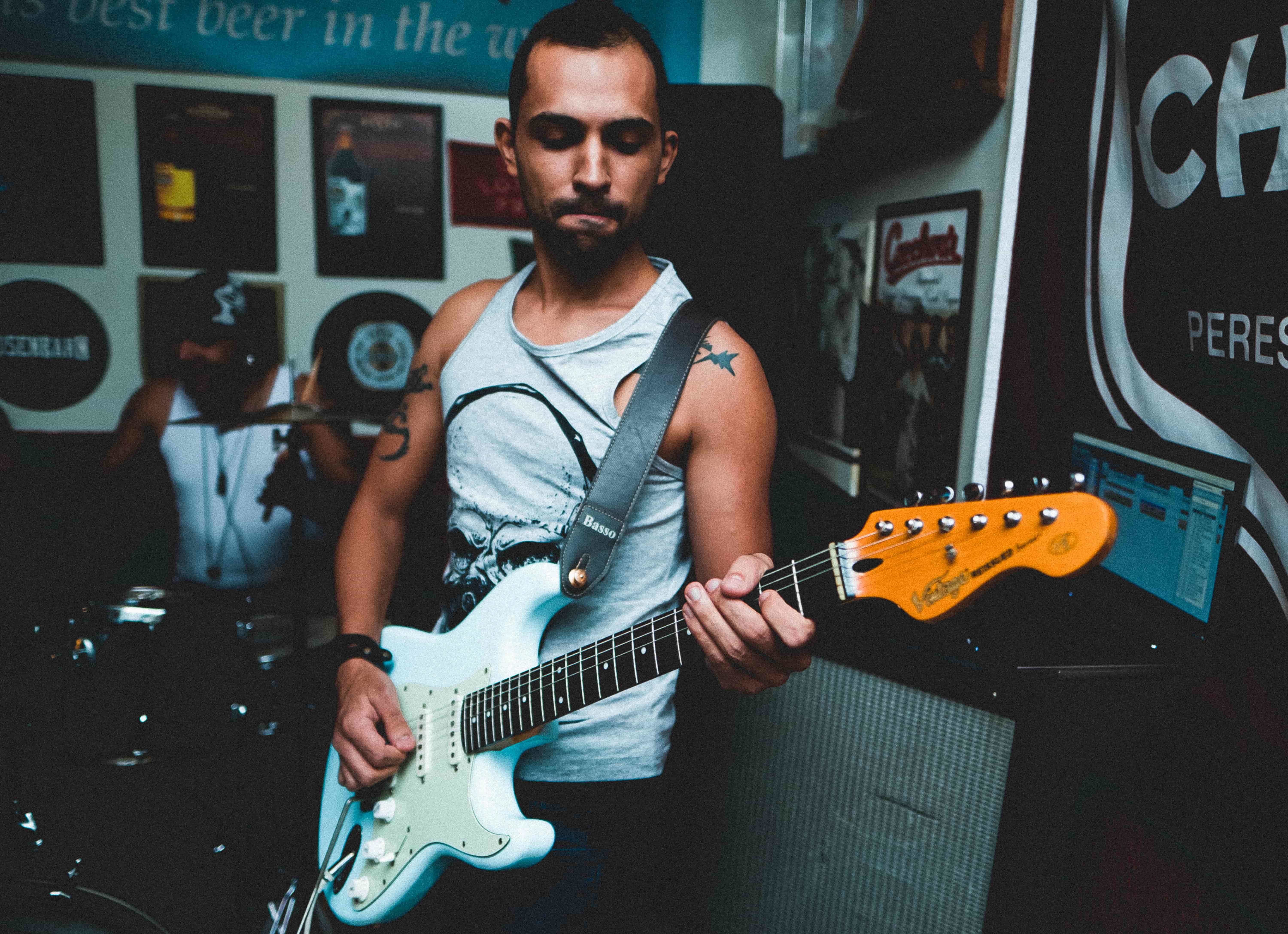 Best Strings For Stratocaster
Sidekick Sound
As an Amazon Associate I earn from qualifying purchases.