Complete Guide on How To Play The Guitar

7 Essentials Items To Help You Learn The Guitar
Read Guide 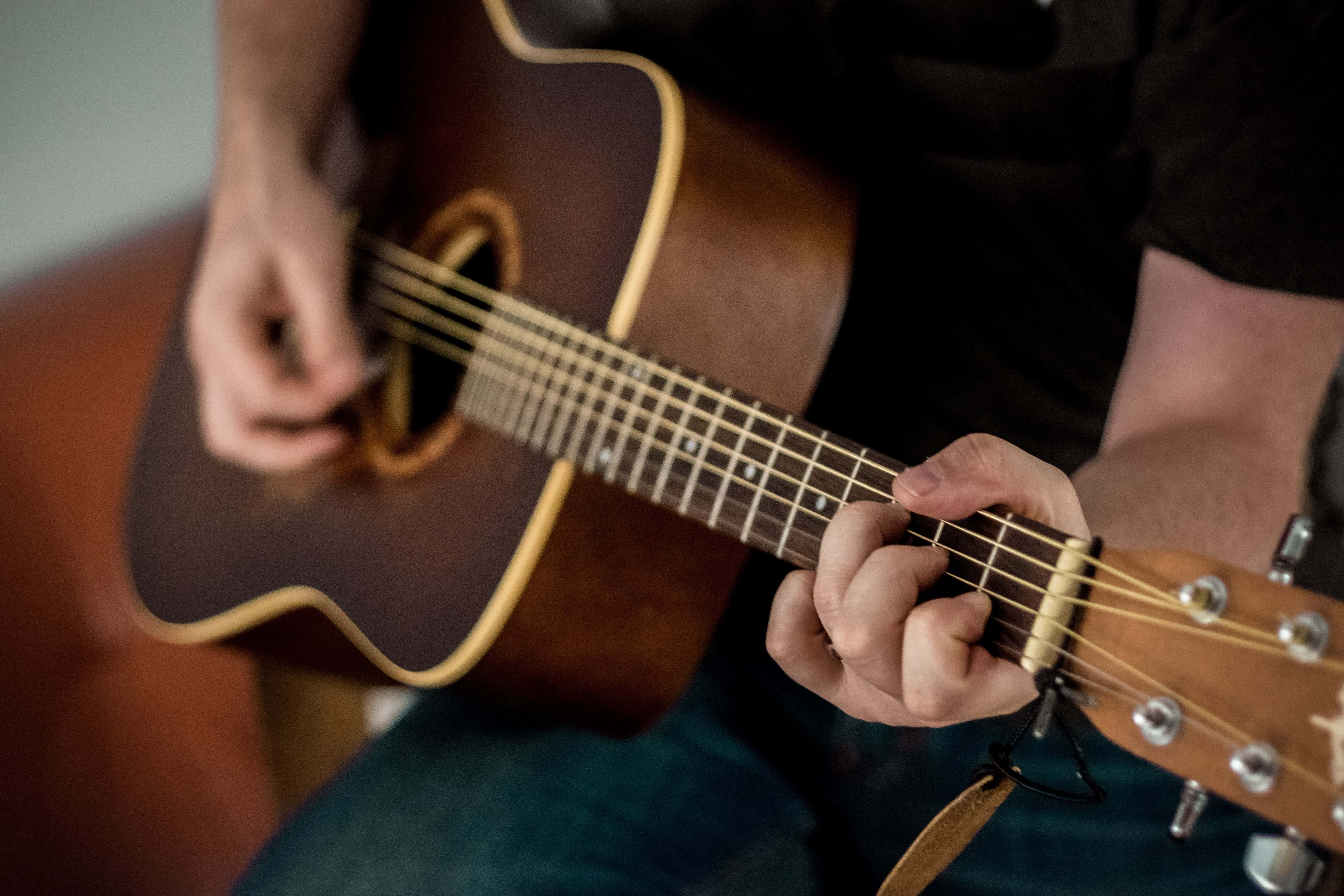 “The beautiful thing about learning is nobody can take it away from you.”
B.B King

Playing the guitar is one of the most enjoyable things a person can do with their free time.  With the help of online search engines, it’s never been easier to learn how to play.  I’ve been playing the guitar for the past 20 years, and have had the privilege to record albums in Nashville, and jam with some well-known musicians.  I’ve played with some of the best guitar players around, and I have done all of this without ever paying a single penny for a guitar lesson.

Before we dive into how to play guitar, I want you to take a step back and watch the video below.  If you are a fan of John Mayer, or not, it doesn’t matter.  Just sit back and watch the power a person can have with just a guitar in his hand.

Why did I have you watch this?  Because in order to play the guitar, you first have to see yourself playing the guitar.  Having someone or a song in mind that you are trying to learn or work up to will give you the motivation to play and practice through the difficult times.  Aspiring to play like a certain guitar player, or to play a certain song, unlocks a hidden genius inside of yourself.  Before we move on, think of a guitar player, or a song that you would like to learn or play like.

Do you have the person or song in mind yet?  Good, let’s keep going.

‍
How To Hold The Guitar

Holding a guitar may seem pretty obvious, but the truth is it isn’t.  The first time holding a guitar is actually kind of awkward.  Depending on which position you choose to hold the guitar will increase or decrease the difficulty.

The easiest position to hold the guitar is sitting down.  When sitting down, the guitar feels more natural and is more accessible to play.  When you take the standing up position, gravity takes the guitar down and the curvature our back decreases, which makes chording more difficult.

The single most important thing to remember when you grab your guitar is to keep a good posture.  A simple rule to keep good posture is to never slouch the guitar back.  This will be a quick temptation because you will naturally want to see what chords you are playing.  While looking over the guitar with your head is okay at first, never slouch the guitar because this will end up creating really bad playing habits.  An example of this is video below (0:55 - 1:18) from Liberty Park Music.

Get To Know Your Guitar: Frets & Strings

Now that you know how to hold your guitar, let’s get to know your guitar a little better.  There are twelve frets on a guitar (after the twelfth fret the guitar repeats itself).  What is a fret?  A fret is a space in between the bars you see on your guitar (see example below).

Notice on the picture from Red Diamond Audio, that the guitar is split into twelve different sections by frets.  Frets help navigate players around the guitar.  They are a reference point for chord charts and music guides to help teach music to musicians.  They make guitars much easier to play.  By comparison, if you notice on an upright Bass guitar, there are no frets.  This makes the instrument much harder to play.  This is one of the main reasons the acoustic guitar is such a great instrument to learn!

Now that you are a little more familiar with the neck of the guitar, let’s talk about the strings on the guitar.  There are six strings on an acoustic guitar.  Starting from the top (the bigger strings), they are E, A, D, G, B, E.  Take a look at the image below from The National Guitar Academy.

The bottom string and the top string are both the E note, just on different octaves.  This helps create the “warm” sound that your ear is already trained to hear and like.

Pressing your fingers on different notes in between the frets of the guitar is what makes up a guitar chord.

How To Tune Your Guitar

Now, the greatest resource a guitar player will have is the handy dandy tuner!  I always tell my students, before you play, tune!  You can be the greatest guitar play in the world, but if your guitar is out of tune, you’ll sound like the worst.

Tuning your guitar is really simple.  You stroke the individual guitar strings you are trying to tune and move the tuning knobs to the left or right.  Moving the knobs back and forth helps the note move from flat or sharp into the correct pitch (see an example of tuning in the video below).

If you don’t tune your guitar, your guitar will sound like one of the performers on the video above!  Do us all a favor, TUNE!  If you don’t have access to a guitar tuner, you are in luck, there is one available for you online.

How To Strum Your Guitar

Strumming is pretty straight-forward. If you are right-handed, you will strum with your right hand.  If you are left-handed, you will strum with your left hand.  The difficultly will be based upon which song you are choosing to play.  Songs that have a lesser amount of chords in between changes are easier to play, while songs that have a greater amount of chords between changes are more difficult.

There are two types of strums on a guitar, a downstroke, and an upstroke.  These strokes make up with is known as a strumming pattern.  Strumming patterns are easy ways to learn a song.  Songs that are downstroke only are the easiest types of songs to play.

How To Make Guitar Chords

Simply put, guitar chords are what makes playing the guitar fun. To make a guitar chord, you place a finger from the opposite hand you are strumming with (hopefully that’s obvious) into a string in between a fret on the guitar.  The thumb of your chord hand will be placed in the middle of the backside of the neck.

Chord posture is very important.  You always want to place each finger on the middle or center part of the string.  This will help the note resonate, instead of sound like it is muted.

After you learn where to place your fingers to make a guitar chord, you’ll be ready to make your first chord.  The most famous chords in the world are probably G, C, D, and Em.  You probably have already heard of them.

The G chord is the dominant chord in the G scale.  The dominant chord is directly tied to the “key” of the song.  Certain rules apply to each key, and only certain chords are available to play.  This is known as a music scale.  Music scales are next-level stuff, but it’s important to know and understand where you are headed as a guitar player.

What is amazing about the Four Chord Method is that if you learn these four important chords, you will be able to play 80% of songs on the radio (if you have a Capo).  This is why learning the guitar is so amazing.  Beginner level chords can have you played very popular songs, and probably the songs that you already love on the radio.  To be able to hear a song and then go and play it on your guitar is an unparalleled satisfaction.

The image above shows you the four main chords that are played in the majority of songs.   The numbers represent the first, second, third, or fourth finger on your non-dominant hand.  The vertical lines are the guitar strings, and the horizontal lines are the frets of the guitar.

A good way to practice these chords is to move from each one with your non-dominant hand and “downstroking” the guitar with your dominant hand.  See if you can switch between each chord while doing a downstroke.  You will notice that at the beginning, your hands will be doing a lot of “processing”.  Because you are developing a new mental muscle, it will take some time to get your fingers to do what your mind is telling it to.  Don’t worry if it is taking you some time, don’t give up!  Remember, if you can play these four chords, you can play 80% of the songs you hear on the Itunes.

Learning your first song is a huge milestone.  I will never forget the first song I learned.  I still play it today.  It is an amazing feeling to play the same song twenty years later and to see how much fun it still is.  Are you ready to have the same feeling?  All it takes is some time and dedication.  If you are willing to put in some work, you will be playing in no time.

A great song to learn first is “With Or Without You” by U2.  Not only is it easy to learn, but it’s a great song!  The song is made up of only four chords! Yes, you guessed it, it is in the four chord method: G, D, Em, C.

The only thing that is different about the song is that it is in the key of D.  The four chords that I have shown you are in the Key G.  This means, that if you play the chords I have shown you with the song, it will sound wrong. This problem can be solved by the greatest guitar invention known to man, the capo!  The Capo is a mechanical device you put on different frets of your guitar to change the key.

If you have a capo, simply put it on the 7th fret and start strumming away to the song.  Magically, the chords you play are transposed to a different key.  Pretty cool!

** If you are looking for some more easy guitar songs to play, check out my friends over at Chord Genome.

I hope you have enjoyed your first guitar lesson.  It was truly a privilege to teach you.  Even though we have never met, I feel like we have already.  Thank you for stopping and I wish you all the best in learning how to play the guitar!

No items found.
Sidekick Sound
Find The Best
As an Amazon Associate I earn from qualifying purchases.
Privacy PolicyContact
© All Rights Reserved